How to Cite the Same Author Different Year APA

Why do you need to know how to cite the same author in different year publications in APA? Because there are a limited number of researchers in a particular topic area. Therefore, many of the same experts participate in multiple research studies and publish their findings.

For example, say you have four journal articles on the same subject. Two articles are written by an expert named Frank J. Metizinger, published in 2012 and 2016. Then, you have an article by Metizinger, Edward Solinger, and Doris B. Lessing, and another one by Lessing and Metizinger.

Here, you have the same author across multiple sources in your APA citations. How can someone reading your paper be clear about which source you’re referencing? By following APA formatting rules, of course. 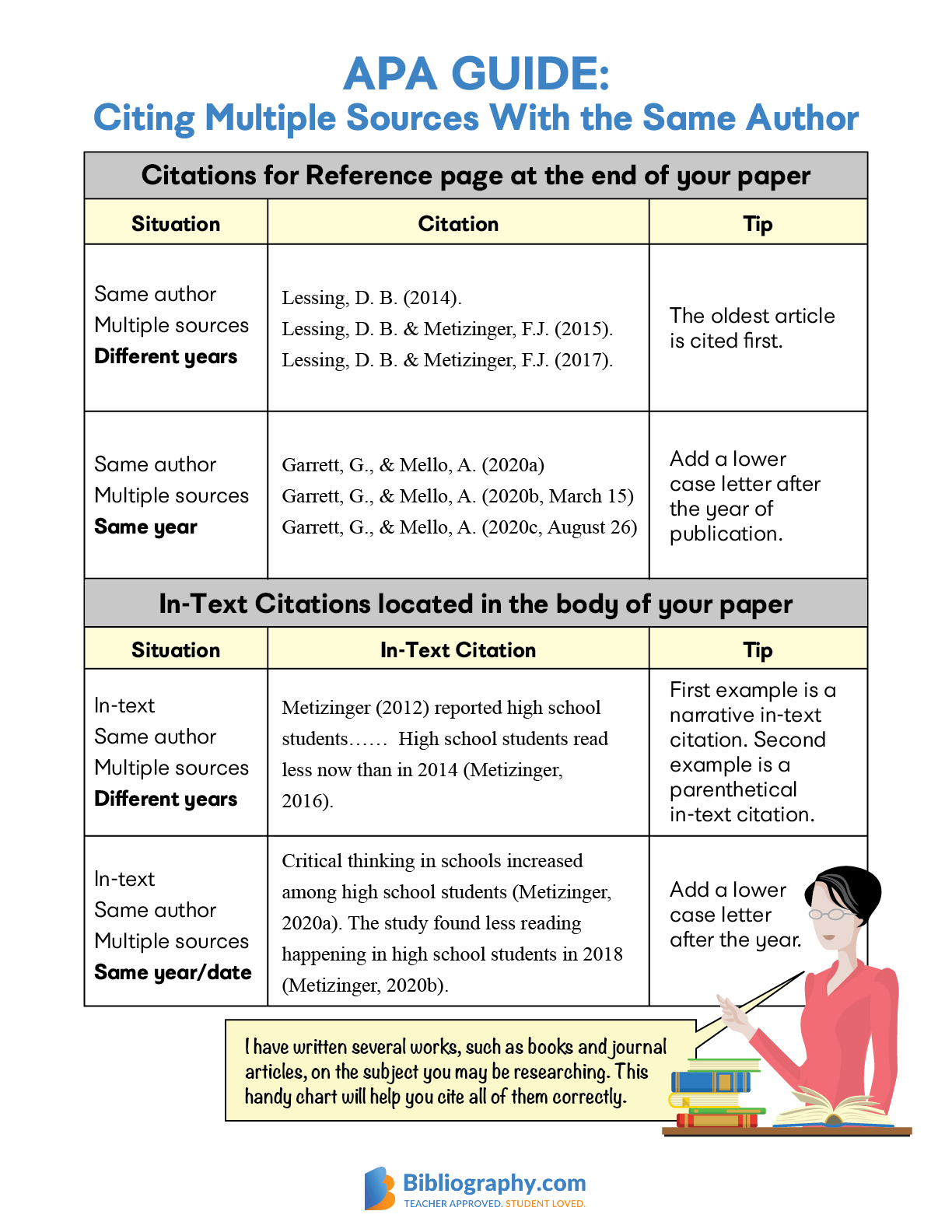 Arrange your sources in an APA reference list by the author’s last name and first name initial. The order follows the letter by letter alphabetizing method. If you have an author or authors of articles published in different years, use the year of publication to arrange them in order. The oldest article goes first.

Note: When you have works by multiple authors, arrange their names in the citation in the same order as they are listed in the publication. Although some authors are listed alphabetically, others may be listed based on the level of contribution.

How to Cite the Same Author and Year in APA

Note: When looking at the title for the same author and date APA citation, ignore any article “a,” “an,” and “the.”

APA In-Text Citation for the Same Author in Different Works

When you create an APA in-text citation, you need to include the author’s name, date of publication, and the page number(s) if it’s a direct quote. These are all enclosed in parentheses. An in-text citation is also called a parenthetical citation. Separate each element by a comma. Separate authors’ names by using the ampersand (&) rather than spelling out the word “and.” 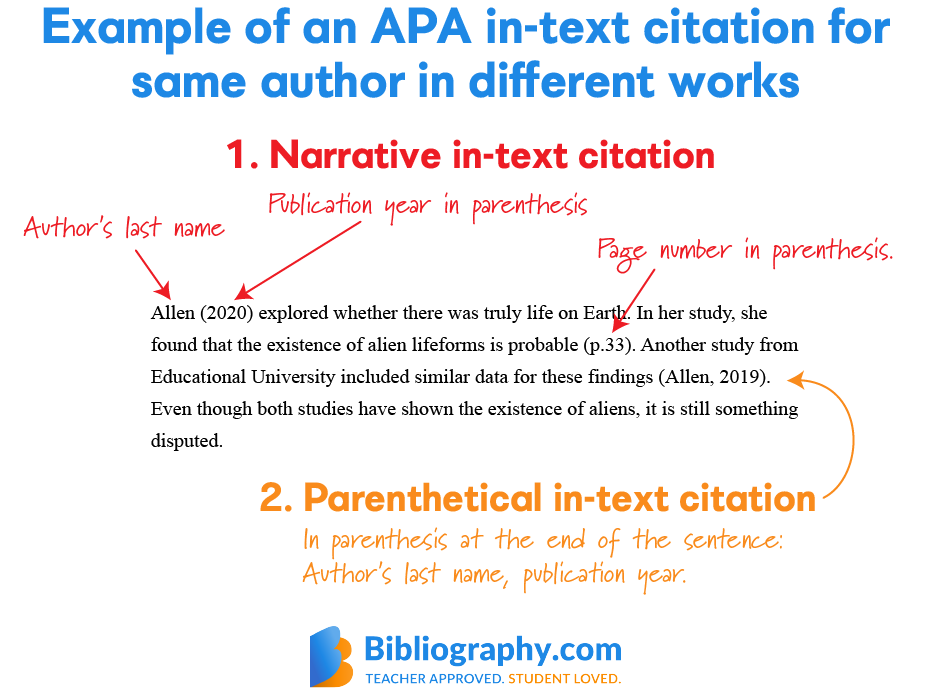 Since you’re citing different publications by the same authors, you need to distinguish between those reports so the reader can find the full source in the reference list. Consider these example combinations and scenarios.

Since 2012, the number of high school students who read two or more books a month has increased (Lessing & Metizinger, 2015).

Three or More Authors, One Article

When you have three or more authors, you use et al.

As reading has increased in high school students, so have critical thinking skills (Metizinger et al., 2017).

Just like in your reference list citations in APA, when you have the same author(s) and date, you use the lowercase letter to distinguish them.

Authors often collaborate. This bolsters their researching capability, building on individual strengths. This is good for the research field but confusing when you’re arranging sources in your APA 7 reference list or creating in-text citations. In order to lead the reader from the in-text citation to the correct reference list entry when citing multiple works by the same author in APA, it’s important to double-check dates and make sure you include all authors.

FAQ Citing Multiple Sources in APA With the Same Author

How do you cite the same author in the same work different year in APA?

To cite the same author in a different year in APA, you list the works from the oldest publication date to the newest. Therefore, 2012 would come before 2013. An example includes:
Barrett, A. (2019). Brain analysis. Penguin.
Barrett, A. (2020). Exploring the brain. Newton Press.

How do you cite the same author multiple times in APA?

In APA, when you are citing the same author multiple times within your paper for different source works, you organize your reference list by the publication year. If the publication year is the same, you organize your reference lists for that author by the title. An example looks like:
Barrett, A. (2020a). Brain analysis. Newton Press.
Barrett, A. (2020b). Exploring the brain. New York Publishing.

How do you cite the same author but different works?

What if two authors have the same last name APA?

If two authors have the same last name in your APA reference list, you alphabetize them based on the author's first name initial or middle initial. An example of authors with the same name includes:
Lopez, A. A.
Lopez, A. B.

How do you in text cite 4 authors in APA?