You’ve finished your paper and organized your references. Now you’re ready to alphabetize the entries in your APA 7 format reference list. However, you have authors with the same name, weird letters, and numbers. What should you do? APA citation order is getting confusing. Rather than panic, learn how to create an APA reference list in alphabetical order by following these quick and easy steps.

How to Put an APA Reference List in Alphabetical Order

Putting an APA reference list in alphabetical order is as easy as ABC… or is it? Most of the time, yes. For authors, you alphabetize the entries by the author’s last or surname. Entries that have no author are alphabetized in APA by the title of the work. 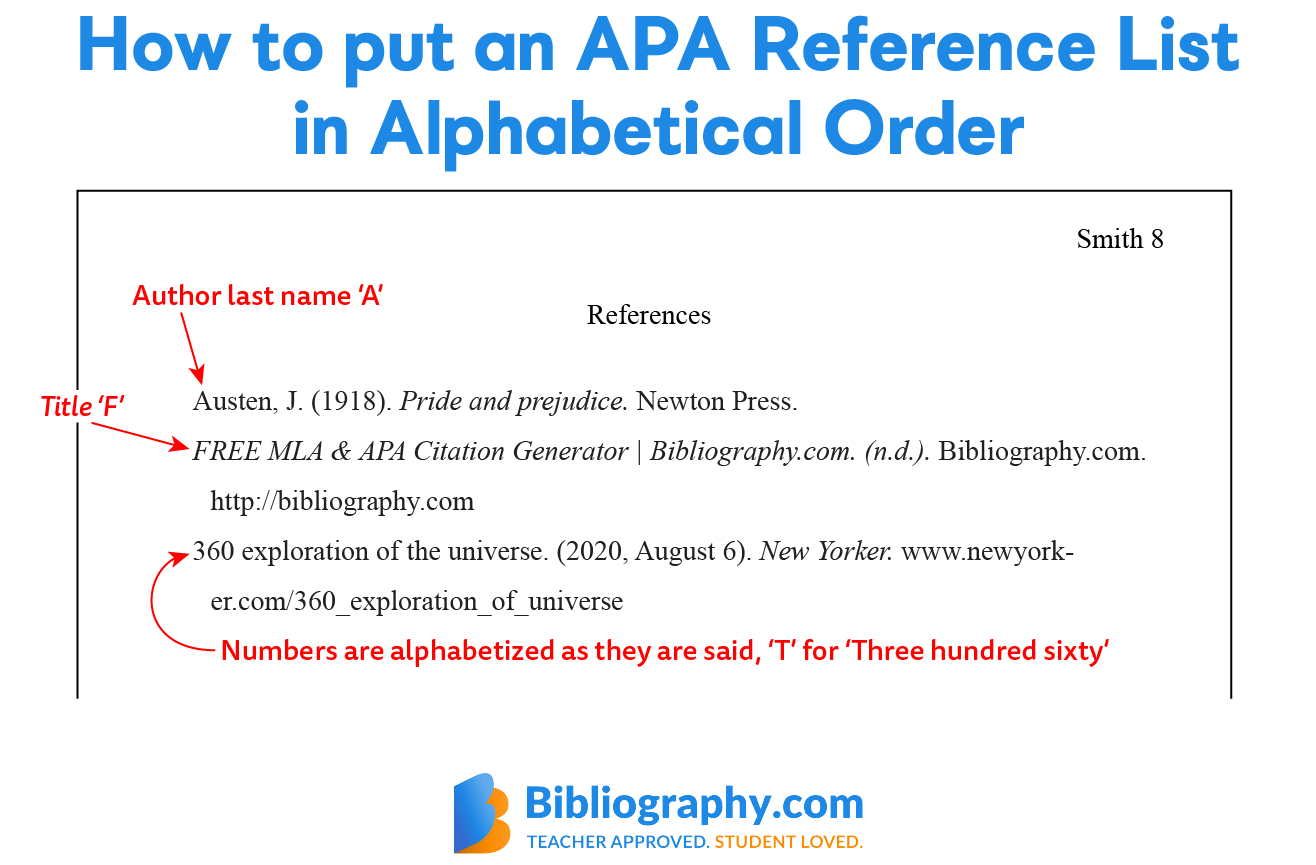 However, when you have three separate works written by the same author and two articles written by people with the same last name but different first names, things get a little tricky. Let’s explore every situation you might encounter when alphabetizing your reference list in APA.

Note: Nothing precedes something. That’s why you place Ring before Ringing.

This surname/given name format is commonly used in the U.S.; however, in other countries, it may be different. If you don’t know how a particular author’s name should be formatted, look for other publications or resources, such as the author’s web page, to figure it out.

When you have authors with the same surname, but different first names, alphabetize based on their first initial.

Note: If the last name is spelled Lopes, then it precedes Lopez. The surnames are spelled differently and are alphabetized accordingly.

Several Works by the Same Author

It’s common to have several works cited by the same author, who may be experts in their field. When that happens, place them in order by publication date, from oldest to newest. However, if the publication has the same author and date, you add a lowercase letter.

Note: You decide who gets an a, b, c, etc. based on the alphabetical order of the title or by month and days added after the year.

Note: Even when the publication date of the multi-author work is earlier, the one author still comes first

An author prefix is a part that comes before the name like da Vinci. The da is the prefix. If the prefix is commonly part of a surname, use it for alphabetizing.

Note: Always follow the capitalization the author uses for their name.

Ignore apostrophes, spaces, and capitals when you are organizing your APA reference list.

Organizations and government agencies are alphabetized by the organization or agency’s title spelled out in full. You do not use the acronym. Additionally, the parent body precedes the department.

The University of New Mexico, Department of Anthropology

If there is no author, move the title to the author’s position. Then, alphabetize it by the first significant word in the title. When it comes to the title, you ignore the words “A,” “An,” and “The.” Additionally, numbers are alphabetized as they sound. Therefore, one-hundred comes before ten.

If Anonymous sign the work, then spell it out and alphabetize it as though it was a real name.

Finally, you alphabetize legal cases by the case name.

Now you have a good idea of how to put your APA reference list in alphabetical order. Go ahead and give it a try. Just remember to follow the basic letter by letter system, and you’ll do great with your APA citations.

Listing Multiple Works by the Same Author in APA References

In what order should references be listed APA?

In an APA reference list, you put each citation in alphabetical order by the author's last name (surname). APA follows the letter by letter system; therefore, A comes before B and so on. When you have authors with the same last name, you move to the first and middle initials. If there is no author, then you alphabetized by the title.

How do you put a reference list in alphabetical order?

To put a reference list in alphabetical order in APA, you follow the letter by letter system, starting with the author's last name. Therefore, in an APA citation, John Adams (Adams, J.) comes before Benjamin Franklin (Franklin, B.)

Do numbers or letters come first in APA references?

In an APA reference page, numbers are alphabetized by how they are spelled out; therefore, a number or letter could come first on the references page. For example:
Adams, J.
360history (alphabetized by the t in three hundred sixty)
Zachary, T.

In APA format, you list your sources alphabetically by the author's last name. If there is no author of the work, then you alphabetize the source by the title of the work. APA clearly states out the formatting rules for every situation in APA format.