How to Quote Shakespeare in MLA

When it comes to Shakespeare quotes in MLA style, you have to first decide if you have a short quote or a long quote. Check out how to create each one.

A short Shakespeare quote is less than three lines. Your quote will be in quotation marks and use a forward slash (/) to break up lines.

Example With One Line:

In “Hamlet,” Shakespeare says, “To be, or not to be: that is the question.”

Shakespeare states, “By the pricking of my thumbs, / Something wicked this way comes.”

If you need to cite a long quote, you’ll use a block quote format. This means that you’ll indent the entire quote five spaces.

Sigh no more, ladies, sigh no more,
Men were deceivers ever,-
One foot in sea and one on shore,
To one thing constant never.

For dialogue, you’ll also use block quote format and capitalize the speakers. You’ll also create a hanging indent on dialogue that goes into a second line. Check out an example to see this in action.

HAMLET: Ay, madam, it is common
QUEEN GERTRUDE: If it be,
Why seems it so particular with thee?

When creating in-text or parenthetical citations for Shakespeare in MLA, remember to list the following:

When formatting your in-text citations, keep these points in mind:

Use the full title of play in the first in-text citation. Then, you can abbreviate it in subsequent citations, like so:

If you are writing about only one play, use the author’s name in the citation rather than the title of the play. 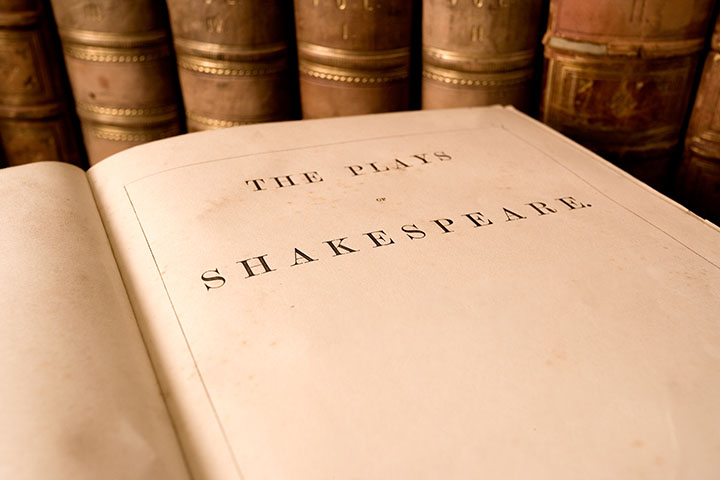 Since the works of William Shakespeare are cited frequently, MLA style requires using abbreviations for in-text (parenthetical) citations. Use the full name in the first parenthetical citation, then abbreviate for subsequent mentions. Abbreviations are created by shortening the title to its primary noun phrase.

Note: Do not place a period after full words such as “ado” or with titles abbreviated to initials

For the full list of abbreviations, refer to the MLA Handbook Eighth Edition, pages 100-101.

How to Cite Shakespeare in the Works Cited

Follow the guidelines for citing a play published as a book using the MLA core elements. Elements 3 to 9 are within the container.

If you are citing a play published in an anthology, follow this format:

In addition to citing works by Shakespeare himself, you will likely also reference sources written about Shakespeare. This follows the standard MLA style.

Now that you know how to cite Shakespeare, it is time to watch it in action. View how “Hamlet” quotes would look in-text and in your works cited.

Creating works cited entries for works about Shakespeare and his plays follows the same pattern as any other author. Use the MLA container system and follow the core elements to organize your sources correctly. Now that you have the know-how, give it a try.