Images can add clarity to your argument or research. In APA, these are known as APA figures. When creating an APA figure, there are a few rules you need to follow. And, APA format lays those out clearly.

Do you want to add a figure to your APA paper but are worried about composing it right? Figures in APA cover everything from pie charts and flowcharts to photographs and infographics. They work with your text to make your points pop, better than any explanation would.

When it comes to APA figures, the APA style manual has made your life easier. Every component to your figure has a specific place, purpose, and even title. Since images can speak louder than words, see how the label, title, image, legend, and notes all work together in an APA figure example. 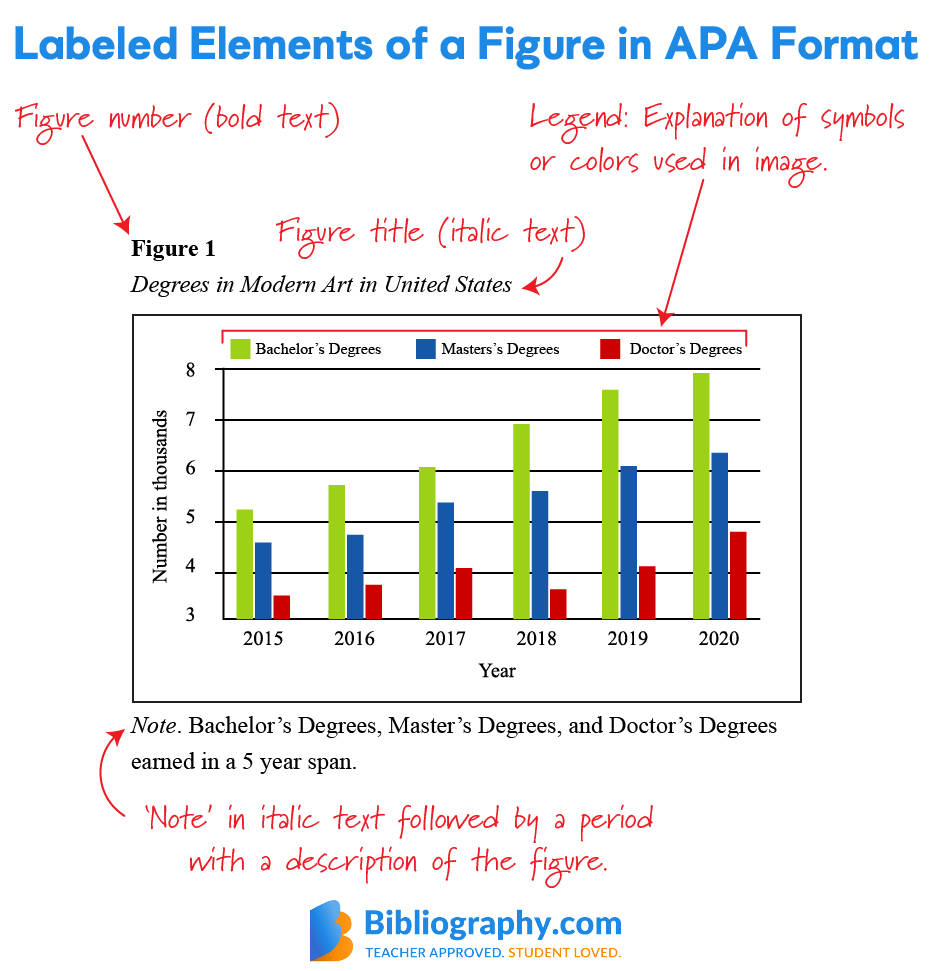 Directly under the figure number (one double space), you add the title of your figure. Don’t just throw any old title on there. You want your title to be descriptive, concise, and clear. Therefore, the title, “Degrees in Modern Art in the United States,” is better than just, “Modern Art Degrees.” Why? Because it gives the reader precise information about where those art degrees are found and provides more clarity.

Now, it’s time to set up your image. This is the pride and joy of your figure and… the whole purpose. Other than being clear and easy to understand, there aren’t too many requirements per APA. However, if you use text in your image, it should be a readable san serif font between 8-14 points.

Legend for the Image

Images like maps, pie charts, bar charts, and illustrations could require a legend. The legend provides the reader with a clear understanding of what the symbols or colors stand for. For example, green stands for a bachelor’s degree, and blue stands for a master’s degree. Having a legend gives readers clarity about what is being shown and its significance. And any words in your legend should use title case, per APA figure formatting.

End your figure with a bang, by providing a clear note. The note lets the reader know the what and why of the figure. The note is classified into three different types.

Tips for Creating Figures in APA

Figures provide further explanation or a visual representation of what is being discussed in the paper; therefore, it’s essential to be precise. If your figure is chaotic, then what purpose is it serving? When it comes to accurate figures, keep a few tips in mind.

Where to Place APA Figures

APA gives you a few options when it comes to figures. You can include them in your paper when mentioned, or you can add them at the end of the paper. Either option is perfectly acceptable in APA 7. However, if you choose to put them at the end, they are placed after the reference list.

In APA 7, a list of figures is not required. However, you can add one for clarity in your paper. It’s similar to a table of contents and includes the titles and location of your figures. An example of a List of Figures looks like:

Creating APA Figures for Your Paper

When it comes to creating an APA figure, it’s all about providing clarity. Therefore, you want to make sure to be clear from your title to your note. And remember to listen to your teacher. If they have different APA formatting rules, listen to them. Now that you’ve mastered creating a figure, it might be worthwhile to check out how to create a table.

How do you cite figures in APA?

To cite a figure in APA, you use the formatting rules for citing an image. Therefore, you include the creator's name, year, image title, the format of the image, and location.

Where do tables and figures go in APA?

The tables and figures in APA format can go in two different areas of your paper. You can choose to place them in the body near the information they discuss, or on a separate page behind the reference list.

Writing a List of Figures is not tricky in APA style. This is because it is similar to the Table of Contents you include. To create a List of Figures, you provide a title and a quick list of all the figures and pages they are located on.

What is APA format table?

A table in APA format is different from a figure. Tables have specific columns, headers, and statistical information they include within them. Therefore, they have their own rules for set up in APA format.