MLA style is designed to be flexible, since it’s used in the arts and humanities. The eighth edition of the MLA Handbook provides an easy way to create entries for different sources, such as artworks, videos and printed materials. Simply follow the core elements framework to create the entries in your MLA works cited list.

There are nine core elements to each entry in an MLA works cited list. The eighth edition revised these elements, so if your instructor requires to you to use the seventh edition, please use that instead of following this system. Follow each of the MLA core elements with the punctuation mark as shown in this list.

Use a hanging indent for each entry. This helps separate the entries to make it easier for the reader.

Remember to include commas, and end with a period.

If there are two authors, include them in the order in which they are presented in the work.

Author refers to whoever produced the work. If you have an editor rather than an author, use this format:

Listing a corporate author works much the same way.

Type titles exactly as they are found in the source. Italicize both the title and subtitle.

The title of an essay, story, or poem in a collection, as part of a larger whole, is placed in quotation marks.

The title of periodical (journal, magazine, newspaper) is set in italics and the title of an article in the periodical is set within quotation marks.

Note: Place periods or other punctuation within quotation marks.

The title of the container is italicized and followed by a comma.

In this example, the container is The New York Times Book Review. Within that container is an article titled “Seeing Red.” The container is described by the date of publication and location (page number).

A television series is made up of episodes. Therefore, the title of the series is the container and the name of the episode is part of that container. The container is described by relevant information about the episode (director, writer, and so on). 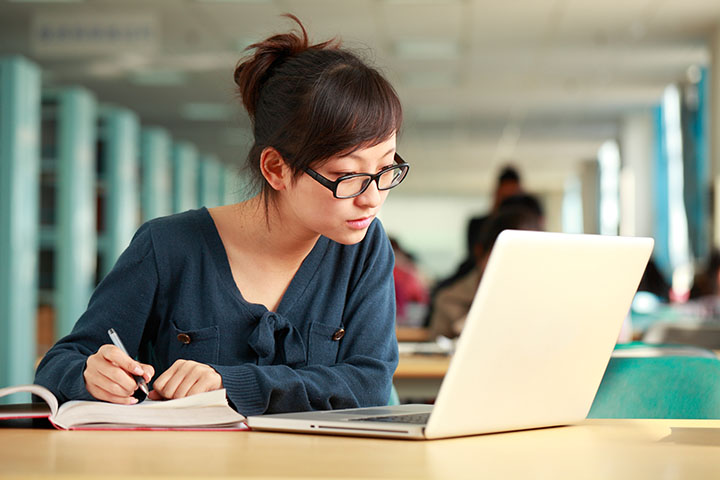 If the work has been edited or translated, include those contributors in this element. Other roles may include:

Include translators and editors of scholarly editions and collections. Works originally published in another language are usually recorded in documentation because they play key roles. If there are several contributors to a project, include the ones that are relevant to your project. If you’re writing about a television episode and focus on a key character, you can mention the series creator and actor who played that role.

Books may be revised, or there may be different versions of musical and film compositions, such as live versions, director’s cuts, and unabridged versions. Alert your reader to the correct version you are citing by including that information in the entry.

If the source is part of a numbered sequence, such as a volume of a book or journal issue, you’ll need to indicate that number in your entry.

Indicate the volume number of a book here.

Journals usually have both volume and issue numbers. Typically, a volume consists of one year’s issues and is numbered sequentially starting with one. Issue numbers start at the beginning of each year and end at the end of the year. For example, a journal that’s entering its 12th year and publishes monthly issues will start a new volume in January – vol. 12 starting with a new issue number for January. For example: vol. 12, no. 1.

However, some journals do not use volume numbers and will simply number their issues sequentially from the beginning. In that case, just use the issue number (e.g., no. 18).

Comic books are numbered like journals with issue numbers

Who you list as the publisher depends on the format of the source.

You can find the publisher of a book on the title page or the copyright page.

Look for the entity that had the primary overall responsibility for the production of the work, such as NBC or Warner Bros.

If the website is published by an organization, such as a library or university, you can find that information easily on the ABOUT or CONTACT page or on a copyright notice.

Sites that host works are not publishers. For example, YouTube and Vimeo host videos and databases such as ProQuest or DOAJ are also hosting services. Therefore, you don’t need to list them.

For academic presses, remember to abbreviate the name of the publisher by replacing University Press with UP such as Boston UP or U of New Mexico P.

Sometimes you’ll see various publication dates listed as the original object was published in various formats throughout the years. How do you know which one to use in your MLA citation entry? Choose the one that best fits your experience in finding that source. If you use an online source that also appears in print, use the date of the online source as that’s the actual object you are citing.

For print sources, there is only one date but be careful to find the actual date of publication of the revision you consulted. The date is either on the title page or copyright page. Always use the most recent date listed. Refer to the actual book to find the date, as online booksellers or bibliographies may be inaccurate.

List the full date, if available, for web comments, web articles, and other online content. If available, include the date a video was uploaded, too.

Use the date printed on journals, magazines, and newspapers. If the full date is available, use that.

Again, remember the key is to make sure your reader can find the exact source you cited. Your entry is creating a path to that source.

The final piece of your entry is the location; therefore, you’ll end it with a period.

In print sources, the work’s location is the page (s) number. Use p. or pp.

Use the URL or DOI to indicate the location of a web source. Follow your instructor’s guidance to determine whether to include links. If you do include a link, leave out the http/https section of the link.

Indicate the name and city of physical objects such as a work of art – sculpture, painting or artifact –listed in your entry. However, if the name indicates the city, don’t repeat the city’s name.

As always, remember the main reason you are going to all this trouble is because you want your reader to find the same source you used in your paper. Once you get the hang of using the core elements to create your MLA works cited page, you’ll feel confident about creating entries for your sources.